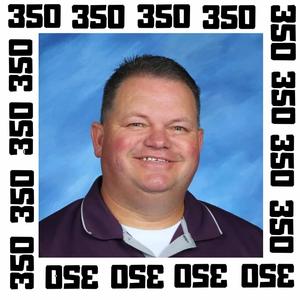 On Saturday night, Panther fans who were inside the Competition Gym were able to witness a milestone for our Varsity Coach Dave Hadley. With our team's 62-45 win over Ririe, Coach Hadley was able to bring his current coaching count to 350 WINS!
Coach Hadley began his coaching career at Colton High School in Washington where he spent 3 years. He then coached at Shelley High School for 17 years and is now in his 4th year at West Jefferson.
As Coach Hadley stepped into the locker room after his Varsity boys beat Ririe, his team was chanting "three fif-ty, three fif-ty...!"
Coach Hadley told the boys that HE hasn't really ever won, it was always the athletes that did all the work to get those wins.
This is a good example of what kind of man Coach Hadley is. All he does is for the students, athletes, and others around him. He is humble, dedicated, kind, and generous. He can also be a little wild and crazy at times, but that contributes to what we like about him!
During his time at West Jefferson, beside coaching Boys Basketball, Coach Hadley has been our Athletic Director and has also taught P.E., Health, and Weight Lifting. He has been the student council advisor. He has brought a lot of fun to our school including introducing "Panther Olympics" during homecoming, teaching the student body new cheers to do at the ball games, and does "The Bean Game" for his Boys Basketball team every Christmas.
Congratulations Coach Hadley! We appreciate all you do for our school district!